I am surprised at the emotional reaction I have had to the announcement that the Rocky Mountain News has shut down. I haven’t lived in Denver for over six years, but I read the Rocky online everyday. Along with the other major daily in town, the Denver Post, the Rocky was the way that I stayed connected to my hometown. While the Rocky was known as the more “conservative” paper, I appreciated that I would get fair reporting and thoughtful editorials. I may be a little biased since I was a paperboy for the Rocky in my youth. I think my feelings go deeper than that.

When it comes to print journalism, I was lucky enough to grow up in a place where the integrity, ethics and truthfulness were never called into question. Aside from the editorial page, with which we are welcomed to agree or disagree, most people in Denver take newspaper stories at face value. I can think of few print equivalents to Bill O’Reilly.

Print journalism has a long tradition of being ethical. Its entire existence relies on the public’s trust. While tabloid rags sell well, few people really expect to find any semblance of truth written amongst their pages. No, for things of import and substance, people turn to the written word.

The problem for traditional print journalism is that their business model hasn’t evolved quickly enough. I suspect that more and more people are like me. I enjoy my cup of coffee in the morning while perusing the online versions of the newspapers, rather than thumbing through pages of their paper versions. I read the online versions just as methodically and deliberately. I have a very set pattern of the order of news that I read. That hasn’t changed. What has changed is the medium.

I don’t have any brilliant suggestions for how to solve the issues facing the newspaper industry. I only know, now, what it feels like to have one of them collapse. It’s not unlike a family member dying. The Rocky connected us to what was happening in our community. It helped to foster debate and dialogue about those events. It facilitated a common experience between citizens simply by reading the same story.

The writing is on the wall for many traditional newspapers across the country. Even here in Utah, the owners of the Deseret News are quietly transforming their paper into a publication that is solely focused on the predominant religion of this state. This move effectively leaves the citizens trusting and hoping that the Salt Lake Tribune will honor the public trust as the last daily voice of professional print journalism in town.

I’m not sure how long I will leave the link to the Rocky Mountain News as a bookmark on my browser. I checked it again this morning like I usually do, only to find, to my dismay, no updated content. So I guess this is goodbye to my Rocky. Thanks for being such a trusted friend . . .
Posted by Nate C. No comments: 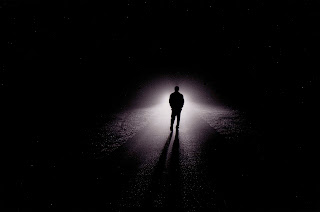 I am a son of the West. Born on the genesis of the plains, in the shadows of rocky giants, I had the best of both worlds. One of the rituals of experiencing the outdoors in the West involves a pillowcase, a flashlight, a heavy jacket and at least a medium dose of gullibility. Why anyone would believe that a roadrunner-like bird would dash into your pillowcase because it was enticed by the light of a torch is beyond me. (Some versions of the hunt include an equally gullible partner banging on a pot with a wooden spoon).

For the perpetrated, this rite of passage certainly leaves them with trust issues for at least 24 hours, after the realization that the car that dropped them off in the wilderness has fled and probably wont be back for a few hours. For the perpetrators, there are lots of snickers and plenty of material for healthy teasing in years to come. I will admit that I have participated on both ends of this event.

After the fear of death-by-coyote has passed and you’ve stumbled your way back to the road, there isn’t much else to do but walk and listen. You finally realize that you can actually see more when you are brave enough to turn off your flashlight, and if your lucky enough to think about it, you look up and for the first time in your life you can see the milky way as people have been seeing it for millennia.

When your ride finally does come rumbling up the road, blinding you with its headlights, you leave a little bit of youthful naïveté behind with an appreciation for how wide-open the world is and that it is filled with quasi-jerks (like the ones who sent you on the hunt in the first place).

The discovery of that wide-open world is chronicled brilliantly in Aldo Leopold’s A Sand County Almanac. The book records his deeply intuitive relationship with nature as he travels back and forth between the big city and his property in the woods of Wisconsin. Leopold’s attention to nature’s detail and complex dynamics are so beautifully described in his prose that you can’t help but be transported into his world and to fancifully imagine his vivid descriptions:

The Geese Return
ONE SWALLOW does not make a summer, but one skein of geese, cleaving the murk of a March thaw, is the spring.
A cardinal, whistling spring to a thaw but later finding himself mistaken, can retrieve his error by resuming his winter silence. A chipmunk, emerging for a sunbath but finding a blizzard, has only to go back to bed. But a migrating goose, staking two hundred miles of black night on the chance of finding a hole in the lake, has no easy chance for retreat. His arrival carries the conviction of a prophet who has burned his bridges.
A March morning is only as drab as he who walks in it without a glance skyward, ear cocked for geese. I once knew an educated lady, banded by Phi Beta Kappa, who told me that she had never heard or seen the geese that twice a year proclaim the revolving seasons to her well-insulated roof. Is education possibly a process of trading awareness for things of lesser worth? The goose who trades his is soon a pile of feathers. (19-20)
I often wonder how many of us that live in urban environments miss the call of the geese? How many are content to see the colors of the autumn leaves on the television rather than to see their splendor first hand? I would posit that those of us that consider ourselves urbane notice the rhythm of the year in a different way. The urban way. The planting of gardens, the mowing of the lawns, the raking of the leaves and the shoveling of snow are about as close as we get to nature anymore.

I’m not complaining though. The more refined a person may become, the more fun it is to take them snipe hunting come spring . . .
Posted by Nate C. No comments: 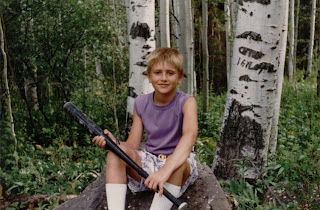 I think for most of us that have grown up in the Intermountain West have a special relationship with nature.  We all have a place in our past that was special to us.  A place that we loved visiting.  A place that we can still see vividly in our mind’s eye today.

Stop and think for a minute.

Can you see it?

Maybe your eyes just closed for a minute, or, if you’re like me, your eyes relax and you focus straight through the computer screen.

But I know you see your place.

Perhaps your place was somewhere close growing up like your backyard, or a field in your neighborhood where you went exploring.

Maybe it was a little farther like a relative’s farm, a favorite park, or a lake where you could skip stones.

My place was somewhere I visited for exactly four days each summer as a boy.  It is a place where I was safe.  Somewhere that I could be myself and be rid of my fear.  To be surrounded by people and alone with God.

My place is Twin Peaks Bible Camp nestled outside of the tiny town of Collbran in Western Colorado.  The camp was run by my Great Aunt and Uncle whom I knew loved me and watched out for me.  I spent six summers in a row as a camper.

Throughout the other 361 days of the year, camp was something I literally dreamt about.  In my dreams I could taste the spring water coming out of the four copper pipes that served as our ever flowing fountain.  I could feel myself wiping off the fine dirt of the tetherball court after tripping on the exposed aspen roots.  I could hear the songs being sung and the prayers being said in the chapel.  And I could smell the wonderful food that was being prepared for all our hungry mouths, three-times a day.

I don’t often think about camp as an adult, or realize what an influence it had on my life.  I can see camp in my mind just as clearly today as when I would leap from my Dad’s truck and go bounding off to reunite with family and friends I hadn’t seen in a year.

While most of the names and faces have now faded from memory, the place, the setting is still there.

Over by the firewood pile, just up from the chapel, three aspens grow.  On the trunk of the tree closest to the pile, are my initials, carved by an 11 year-old boy.

And 19 years later, that boy, deep inside, can revisit those trees with a smile on his face and a fond memory of a place that he so loved.