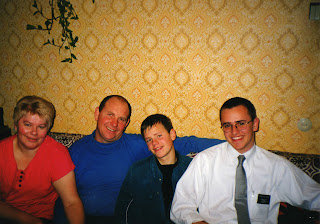 9:10 left in the fourth quarter and my Broncos are down 7-34 against the Patriots. At this point I’m tempted to change the channel (even though I know I wont). Both my ex and my cat know that when the Broncos lose to leave me alone for at least two hours and sometimes up to a week.

I’m convinced that in order to be born in the Centennial State and particularly the Mile High City that you have to sign a contract to be a Broncos fan for life. But what is it that makes Denver such a wonderfully crazy sports town? It’s tribalism. At least it’s as close as we get here in the good old U.S.A.

When I lived in Vilnius, Lithuania I visited a family every month to make sure they were doing well, still coming to church and hadn’t killed each other yet. They were a mixed marriage, which was rare. The wife was Lithuanian and the husband was a very staunch Russian (their poor son). He was loud, obnoxious and we argued very loudly almost every time I went to eat dinner. I totally loved them.

One day as I was taking off my shoes upon entering their apartment, he shouted down the hall, “Currey, what are you?” To which I responded that I was a missionary. He wasn’t satisfied and asked what nationality I was. “I’m American.” I shouted back. He was indignant at this answer and said that there was no such thing. We went the rounds about this and finally I answered that I was Irish. This seemed to be the right answer in his mind and he smiled broadly. “So there! You’re Irish!” “No, I’m American.”

Then he shouted the word “отечество”. I hadn’t heard this word so I looked it up – Fatherland. “You Americans don’t understand this word. You don’t have a sense of it and that is why you will never understand the rest of the world.”

He was right. We as an American nation are all pretty much mutts. We don’t have a common ethnic heritage. We are a migrant nation. We don’t even sit still for long within our own nation. My Lithuanian and Russian couple could trace their lineage back over a thousand years in relatively the same area. I can trace my Colorado heritage back exactly three generations. Then it heads to Ohio, Indiana, Kentucky and Pennsylvania. I’ve never even been to any of those states.

As most people know, I am fiercely proud to be from Denver. They also know that I will most likely never live there again. As an American, I’m not tied down to any particular area with a sense of Fatherland. But, no matter where I live, I will always have the Broncos to claim as my tribe.
Posted by Nate C.

Well said, Nate. The sense of collective belonging has much to do with why we are so drawn to and identify with sports. (Sport and American Society was one of my favorite classes at the U.) From a very proud Dane/Swede! :)
Cheers, David