In a Tiny Little Mountain Town 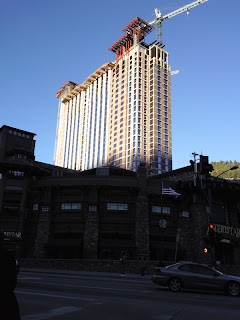 When I was 12 years old, for some reason I remember the statewide vote held to allow small-stakes gambling in the three historic mining towns of Central City, Blackhawk and Cripple Creek, CO.  I don’t recall the size of the victory, but having approved the state Lotto a few years earlier, Coloradoans seemed to want to travel to the hills to try their luck at penny slots and $5 blackjack hands.

This was all under the virtuous guise of helping to save the towns’ economies and restore the historic mining buildings.  As a third grader, everyone in the Jefferson County school district took a field trip to Central City to tour an old gold mine and explore the historic district of a town that almost became our state capitol.  Central City was one of three finalists along with Golden and Denver and lost in a squeaker to the “Queen City of the Plains”.

I have some personal family connection with Central City.  My great-grandfather was the first person in the county with a pilot’s license and was the first to offer flying lessons.  My grandmother was elected Gilpin County Clerk and was forced to resign under suspicion of embezzling.  It seems the Wild West mining mentality of those towns never dies.

It was under the auspices of the old mining days that we explored the town as 9 year-olds and from what I can remember it was a bunch of run-down, old buildings with mom and pop shops.

Fast-forward 17 years later.  I hadn’t stepped foot in Central City or Blackhawk since my field trip as a child.  I was there to celebrate my mother’s 50th birthday.  As I drove up the new highway and entered Central City, I was pleasantly surprised to see the massive historical restoration of the town.  All of the buildings are in pristine condition and it isn’t hard to imagine that with the exception of the automobile, this was pretty much what the city looked like back in the 1860’s gold rush era.

Blackhawk was a different matter.  Their town fathers have really seized on the gambling revenues and, while they have restored their historic district as well, they have encouraged new and very modern casino growth on the outskirts to the South of the town.  As I pulled into our nice new casino for the weekend, I was shocked to see the elevator cores of a new 33-story Ameristar Casino being built across the street.  While that may seem unremarkable to some consider that the LDS Church office building in Salt Lake City has 28 stories and that the population of Blackhawk is 118 people.

In my estimation the civic leaders of both Central City and Cripple Creek have kept to the spirit of what small-stakes gambling brought to their communities by not letting it completely destroy the history and overall aesthetics of their towns.  Blackhawk has sold it’s soul to the developers with the argument that there is not a “historic preservation zone” within their city set up by their planners and that they have every right encourage as much growth and tax revenue as possible.

This past November, Coloradoans went back to the polls and approved a constitutional amendment, bank-rolled by the casino industry, to raise the legal betting limits from $5 to $100, stay open 24-hours a day, and introduce the games of roulette and craps.  This will only embolden the bigger names in the casino industry to enter the market and develop further tracts of land in these tiny mountain towns.  Worse yet, is the thought that Central City and Cripple Creek will be forced to acquiesce to the loss of gambling revenue from Blackhawk and open their towns to the utter destruction of their historic characters and souls.

I’m ashamed to admit, but I will probably head up the hill next time I’m in town and try my hand at the new gambling limits.  Logic tells me that with the larger limits I should be able to win back my previous losses 20x faster this time around.