The Journey is Half the Fun 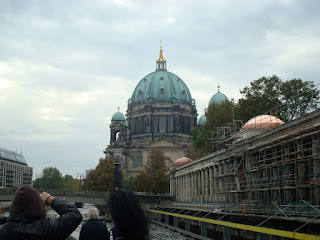 The journey is half of the fun (especially with our crew). After a seemingly quick layover at JFK in New York, we took off, scattered on a Delta 767, and 8 hours later we had put the United States and the Atlantic Ocean behind us.

Berlin’s airport is definitely not Frankfurt. It is smaller, older and could use a good German remodel. It is without a doubt designed for German efficiency though as our bags arrived not 10 minutes after we had cleared passport control.

The majority of the group has been shuttled to the hostel while I stay back waiting for another student who is travelling on a different flight. I just purchased my Tageskarte for the Berlin public transit, as we will be taking a bus and the subway to catch up with everyone else.

Two things strike me already after only being in Europe for two hours: 1, my German is rusty at best and 2, it is a real treat to travel with others that have not traveled to a foreign land.

Speaking a different language is not necessarily a must in today’s Europe, but having a rudimentary knowledge certainly garners the good will of the locals. My laughable attempt at buying my transit card in German got me some sympathetic smirks and an immediate offer to do my transaction in English (for which I was grateful). I think it is important for other sojourners to follow one simple rule when travelling in Western Europe:

ASSUME EVERYONE WITHIN EARSHOT SPEAKS ENGLISH WHEN TALKING WITHIN YOUR GROUP.

This simple rule will help people to avoid making culturally insensitive comments, or have others around you view the group as typical American tourists.

It is fun to see the excitement that is so palpable with some in our group. This is a magical experience already for them and they are just taking everything in. I remember the first time I was in a country where I could not read the signs or understand anything anyone was saying. How exotic. How transformative. How poignant those memories were looking back.

So, as I run off to find Sarah (I hope she made her connection in Paris), I can hardly contain my love for travel and the sharing of this experience with so many others that I respect and admire. Their eyes are wide open right now, and it is a good reminder, for me, to view this experience in studying cities, cultures and societies in Germany with the hope of changing my life perspective yet again. 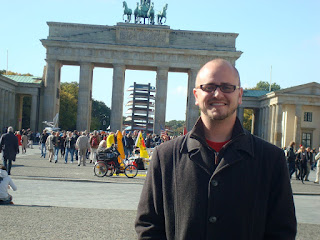