In beginning art classes you learn the concepts of positive and negative space. In architecture and planning, these spaces can have tremendous impact on the psyche of citizens and visitors alike. 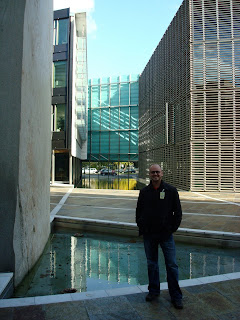 During our time in Berlin, two places (one example of each) stands out in my mind. The first is an example of positive space. There is nothing like it anywhere in the world. 10 years ago the Nordic countries of Denmark, Iceland, Norway, Sweden and Finland agreed to create an embassy complex that consisted of six buildings. One for each of the countries and one commons building where they can gather with public, hold seminars, produce exhibitions and simply eat and drink together.

This shared embassy space is symbolic not only for the physical design in which the embassy’s buildings are arranged in the order they are seen on any map, but for the materiality of the structures and the energy efficiency in which they espouse to the global community at large.

This is no ordinary complex. Ambassadors are at eye level with one another, effectively letting one another gaze into the workings of their neighbors and the relations with their largest trading partner, Germany.
Water features are incorporated into the complex with the representation of the Atlantic Ocean and the Baltic Sea separating the buildings. 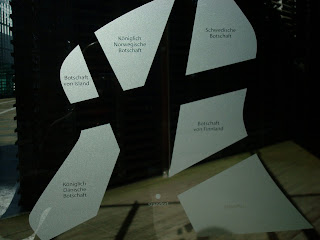 Inside the public exhibition space the Danish embassy was sponsoring an exhibit entitled “Building Sustainable Communities”. This was an exhibit that showcased Danish architects and their work around the world. The only architectural model that was displayed was the Massar Children’s Discovery Center, which is currently under construction in Damascus, Syria. Ironically, the Syrian embassy was right across the street. I asked our tour guide what relationship the Nordic complex had with the Syrians and she answered “none”. While this was not surprising on the diplomatic level, I found irony in the proximity of the embassies and that the Syrians most likely had no idea that one of the premier architectural endeavors in their nation was prominently displayed right across the street. 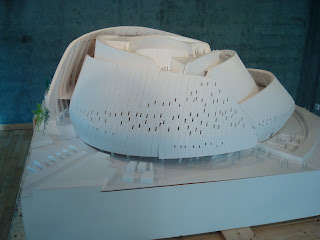 While the embassies all function separately with their own foreign agendas and policies, the symbolism of symbiosis this complex purports as a purposely-built positive space in the New Berlin may be lost on those that don’t know what to look for. The average citizen of Berlin or Germany most likely has no reason to visit these buildings, but for those of us lucky enough to get a tour, our sensibilities of what is possible has forever changed.
Posted by Nate C.