All across this nation in the beginning of May, thousands of people take to the streets and participate in a sort of re-imagining of their cities by participating in a Jane Jacobs Walk. These events held by and for local community members focus on observing their neighborhoods and moving through them using alternative modality options to the automobile. Some move by transit, others by biking through their cities, but the vast majority simply walk as each events’ themes are explored on foot and promote walkable neighborhoods that provide for more authentic forms of personal connection with their built environments and stronger bonds with their neighbors.  Through the simple, yet powerful, act of observing along their event route, participants are helping to strengthen their neighborhoods and cities one block at a time.

Regardless of the actual mode of travel all Jane Jacobs Walks have three commonalities:
In May of 2012, over 130 events were held in 34 cities across the United States. Each of these events had their own theme or agenda and each were located in vastly different urban locations and climates. At first glance it would seem as though these events were a hodgepodge of disjointed activity filled with urban explorers and road warrior bicyclists, but this is not so. If you were to close your eyes for a moment as a participant on a Jane's Walk you would hear the laughter of children, parents pushing strollers, the whir of electric wheelchairs, and the anecdotal wisdom and experience of the place being passed between the generations. 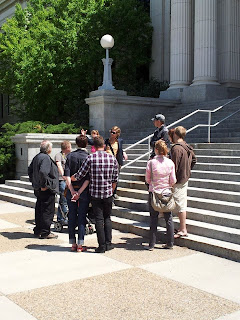 I am privileged to serve as national director for these Jane Jacobs Walks in the United States. Mine is a unique position, one in which I have been able to harvest the anecdotes and experiences of these common journeys for the past three years. Here is one Jane’s Walk experience that I participated in this year and how the power of re-imagining their community is helping to shape the future of their city.

PROVO, UT - We met on the courthouse steps in this city of 100,000 residents. Home to Brigham Young University, Provo is unabashedly conservative where over 80% of the residents are members of the Church of Jesus Christ of Latter-day Saints (the Mormons). Our Jane’s Walk participants represented well the conservative characteristics of the city and it was, admittedly, my first time participating in one of our events in a Republican stronghold. As we began our journey through the historic downtown district of Provo, the typical concerns of neighborhood connectivity, auto-centric planning and lack of pedestrian and bicycling infrastructure were voiced. Overshadowing all of this were two major opportunities for the city. 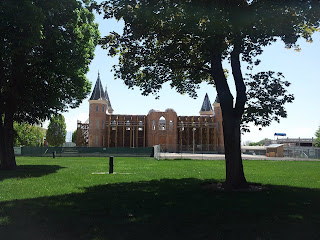 The first was a newly announced LDS temple in the core of the downtown area and the second is the construction of the new intermodal hub and terminal station for the commuter rail that will connect Provo to Salt Lake City and beyond. We walked to both locations and the excitement in the group was palpable. Each of us recognized that this is now a pivotal moment in the shaping of how people move in the city and of how people interact with a long forgotten downtown area. 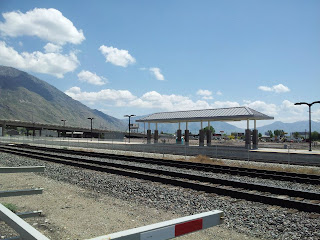 The discussions quickly turned from missed opportunities over the past decades to the future possibilities to create an authentic experience for all of Provo’s citizens and their relationship to place. The new temple will provide for an influx of people and traffic into the downtown core, helping to revitalize the economy of the area. The intermodal hub, located on “the other side of the tracks” from downtown will connect two neighborhoods in Provo that have historically had little to do with each other. As we walked the 6 blocks in between the two projects it was easy to imagine a vibrant, walkable, bikeable community that would serve and honor the values of conservative Provo just as well as in a more liberal New York City or Portland.

I have long posited that the values we espouse as an organization and the structure in which we provide for groups to Walk, Observe and Connect with their spaces transcend politics, religion, race or any other characteristic that has the potential to divide people. The beauty of a Jane Jacobs Walk (and really when the magic happens) is the moment after we have gathered in a common place for a common cause and we begin to take our first steps together on a common journey.

No matter who we are, or where we come from the journey of a Jane Jacobs Walk plants the seeds in the gardens of our imaginations. Our relationships with our places and with one another fundamentally changes as we walk together and simply observe what the best possibilities could be. Most of us care deeply about our relationships to the places in which we live, work and play, we simply may not have the vocabulary or experience to vocalize our hopes and dreams for them.

Jane Jacobs Walk has been, and can be, the vehicle for which many people, like our friends in Provo, begin to re-imagine their relationship to place.
Posted by Nate C. No comments: